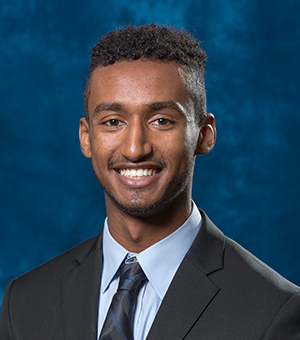 Yidedia Bekele’s hard work has paid off. The senior business intelligence and analytics and fintech double major has accepted a full-time risk and financial advisor position in Deloitte’s Omaha office. But even with post-graduation employment secured, Bekele is not planning on coasting to May. Or ever, for that matter.

Whereas most consider their education completed once they have earned a diploma, for Bekele, it’s a lifelong pursuit.

“I will always want to push myself,” he says. “Education is how you break apart from the cycle you are born into. I will become smarter and more successful as time goes on if I continue to learn.”

What Bekele was “born into” was a family that emigrated to the United States from Nairobi, Kenya when Bekele was 5, first settling in Milwaukee before relocating to Chicago. His is a family that not only professes the importance of education but is willing to suffer huge inconveniences and work long hours to make that education a reality.

As a student at Loyola Academy in Chicago, Bekele was up before the sun to catch a 5 a.m. bus – the first of two buses and two trains he took every morning – to arrive for the start of school at 7:45 a.m. He says he didn’t mind his morning commute, and its reverse in the evening, because “every bus and train ride to school was getting me closer to Creighton University.”

His parents did not want Bekele to work while at Loyola Academy. His sole responsibility was to focus on school, not “trying to make a few dollars here and there,” he says. Both of his parents worked long hours so he would be free to study. Their dedication plus scholarship awards, including those earmarked for first-generation college students, made Creighton possible.

“College was mandatory. It was a way to get a better life. My parents always said four years of hard work to get what you want is a small price to pay in the end,” Bekele says. “I was willing to bury my head in my books so I could live a life that I wanted. I couldn’t retake a class or do summer school. I could never get a second shot at school. I don’t only learn for me but also for my parents, who work 12-hour shifts to get me where I am today.”

But Bekele, through the Fr. John P. Markoe, S.J. Leadership Program, discovered that college was more that attending classes and earning a degree. He says the four-year academic and leadership coaching program has played the biggest role in his development at Creighton. It taught him how to find an internship, guided him on what classes to take, helped him learn networking skills and encouraged him to join campus clubs and organizations. He realized that “college is a place where you bounce around different ideas so you can grow as a person and learn new things,” he says. “There is such diversity of people that I didn’t expect to get at Creighton.”

So, Bekele joined Alpha Kappa Psi business fraternity and the Energy Club. He participates in the Anna Tyler Wait Leadership Program and spent a semester studying abroad in Germany. He has also worked multiple internships. The first was this past summer as a member of Mutual of Omaha’s operations excellence (OPEX) team. Currently, he is interning with Macmillan, located in Raleigh, North Carolina. Both experiences were virtual. Bekele doesn’t mind working remotely, but he does own that it requires one to be a self-starter and highly organized.

“I did my interviews virtually, so I was used to it when the pandemic hit,” he says.

His four years at Creighton are coming to a close, and Bekele says he is grateful to the school that has equipped him to tackle confidently problems he hasn’t encountered before, and to his parents who imagined a life for him that they themselves could not see.