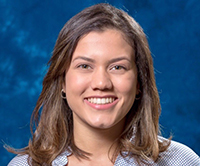 The senior from Santiago, Dominican Republic, graduates in December with a double major in marketing (strategic communications track) and management (entrepreneurship track). Come January, she will relocate to New York City to begin an internship with the fashion house of Naeem Khan, a designer known for his intricate gowns and of whom former first lady Michelle Obama is a fan. Rodríguez Gómez will primarily work in the wholesale department but will also have cross-functional duties in marketing and public relations.

Rodríguez Gómez first met Khan through her aunt, who is the general director and founder of DominicanaModa, the largest fashion week in the Caribbean. Khan has twice participated in the premier fashion event. The opportunity to network with a designer at this stage in her career via a family connection was golden – and fruitful.

Rodríguez Gómez attended Instituto Leonardo Da Vinci, a school that enjoys a special relationship with Creighton, which offers annually one full-tuition scholarship to one of the institute’s students. Da Vinci officials determine which of their pupils is awarded the scholarship, and Rodríguez Gómez was chosen from her senior class. It was a great fit, as Creighton’s atmosphere appealed to her.

“I researched about its commitment to Jesuit values and how it integrates these into learning in and out of the classroom,” says Rodríguez Gómez. “Creighton’s low student-faculty ratio also stood out to me. Professors are very much willing to help you and guide you until you completely understand the material.”

Rodríguez Gómez is drawn to fashion because it is expressive and very personal. “What one is able to design and create is valuable. It comes from instinct, from previous experience and, mostly importantly, one’s view toward the world,” she says.

She paired her passion for fashion with a business education because business “prepares you to think strategically.” She says she chose marketing for the “human connection it has with analysis” and its creative outlet, and felt management, in particular entrepreneurship, was also a perfect channel for her creativity while learning how to grow a business.

After gaining the necessary industry experience, Rodríguez Gómez plans to move to Italy to complete a master in fashion and luxury brand management. Her ultimate goal is to have her own clothing or shoe brand. To this end, Rodríguez Gómez studied abroad for a semester in Milan, calling it a “total immersion” experience. She completed her marketing electives in Italy. Given that Milan is one of the fashion capitals of the world, her course work focused on fashion and design. She took a fashion marketing and merchandising course as well as a fashion brand management class. She also increased her proficiency in Italian, her fourth language. (The other three are Spanish, English and French, and she will soon add Portuguese to the mix.)

While in Milan, Rodríguez Gómez interned at Ghigocalzature, a family-owned and operated shoe manufacturer that specializes in high quality footwear in small and large sizes for both men and women. She primarily managed the company’s social media to broaden its online presence by adding new customers and a younger demographic to its established base of returning customers and a more mature demographic.

“This gave me insight into how to strategically manage and brand differently,” she says.

Rodríguez Gómez says Creighton is her “home away from home” and calls her time here “priceless.”

“I love how I can say that I graduated with two majors in four years,” she adds. “This is something not possible back home. Creighton has helped me grow in all aspects of my life and has helped me find the perfect balance in all of them.”