For nearly a decade, strengthening the U.S. economy has been the nation’s #1 priority. Yet few Americans understand how the economy operates, much less how to improve it.

Dr. Goss is the director of the Institute for Economic Inquiry and a professor of economics at Creighton University Heider College of Business where he holds the Jack A. MacAllister Chair in Regional Economics. He is also director of The Goss Institute for Economic Research in Denver, Colorado, a bipartisan think tank conducting business and economic research and providing innovative, practical recommendations that affect change and public policy.

As a professor, Dr. Goss brings the economy into focus for students with case studies pulled from his own files to show how real-life situations match up with the economic theories found in their textbooks. Able to simplify complex economic issues, Professor Goss offers students tangible knowledge and relevant insights they can use to predict and shape public policy debates and economic outcomes throughout their careers—and lives.

As an economist, Dr. Goss is a highly respected, nationally-known expert on the mid-American economy who can articulate how regional economic situations can impact the nation or the world – and vice versa. He is a trusted voice who is often tapped by government and business leaders, economists and the press to shed light on economic issues and trends in terms the average person can understand. He is often a leader in public policy debates, both regionally and nationally.

Dr. Goss received his Ph.D. in economics from the University of Tennessee in 1983 and is a former faculty research fellow at the NASA Marshall Space Flight Center.

Through his work with The Goss Institute, Dr. Goss has amassed more than 20 years of economic data about Midwest agriculture and manufacturing into a proprietary dataset that is coveted by analysts the world over. He produces two monthly reports: the rural Mainstreet Index that surveys banker’s insights about business conditions in 11 states; and, the Mid-American Outlook that surveys purchasing managers in 12 states.

Special Note: Bankers and purchasing managers who are interested in participating in the surveys are invited to contact Dr. Goss directly via info [at] earnestgoss [dot] com. All survey information is confidential and shared only as aggregate data. Participants receive exclusive newsletters not available to the general public.

Dr. Goss is a past board member of United Way Omaha and Mosaic of Omaha.

Dr. Goss is a member of the editorial board for The Review of Regional Studies. He is past president of both the Omaha Association of Business Economics and the National Purchasing Management Association-Nebraska.

In 2003-04, Dr. Goss was a visiting scholar with the Congressional Budget Office in Washington, D.C., and in 2005, the Nebraska Attorney General appointed him to head a task force examining gasoline pricing in the state.

Dr. Goss has testified before the Kansas Legislature, the Nebraska Legislature, and also with the U.S. Congress regarding the closure of GM and Chrysler dealerships. He continues to consult on the financial impact of shuttering GM dealerships.

A professor with Creighton University for more than two decades, Dr. Goss has made many significant contributions during his tenure, including acting as the driving force behind the Creighton Portfolio Index that includes an investor scorecard, allowing novice stock pickers to compare their portfolios with those of professionals. 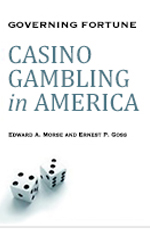 Dr. Goss is the co-author of Governing Fortune: Casino Gambling in America published in 2007 with Edward A. Morse and Changing Attitudes toward Economic Reform during the Yeltsin Era, published in 2003 with Terry D. Clark and Larisa Kosova.

Dr. Goss has contributed to a number of prestigious journals, including:

Dr. Goss has presented at the Southern Regional Science Association on several topics, including: “The Impact of Casinos on County Bankruptcy Rates” (2004); “The Impact of Foreign Capital on Productivity” (2002); and, “Internet Usage and Wage Growth” (2001).

Dr. Goss has been a guest on national TV shows such as Lou Dobbs Tonight with the Fox Business Network and CNBC’s The Kudlow Report with Larry Kudlow. His ongoing research at The Goss Institute is cited each month in approximately 100 newspapers, including The New York Times, Investor’s Business Daily, Wall Street Journal, The Christian Science Monitor, Los Angeles Times, USA Today and Chicago Sun-Times, as well as other national and regional newspapers and magazines. Nearly 100 radio stations also carry his Regional Economic Reports each month.

An expert on agricultural economics, manufacturing and banking industry issues, as well as interest rates, the labor market and more, Dr. Goss is a lively, engaging speaker who easily vacillates between the theory and practice of economics, explaining how economic situations and trends can impact individuals, businesses, communities, regions, the nation and the world.