The Rev. John P. Schlegel, S.J. was announced as the president of Creighton University in the spring of 2000. A former political science professor at Creighton, Fr. Schlegel had since 1991 served as president of the University of San Francisco.

Immediately, Schlegel addressed the composition of the student body and the previous administration’s attempts to combat declining enrollments. He also stated that while he appreciated his predecessor’s efforts to avoid raising tuition, he felt that Creighton was “priced dangerously low.” Faculty in the College of Business Administration noticed the trickle-down effects of low tuition; every year felt like a struggle for resources. As a result of Schlegel’s assessment, the board agreed to a tuition hike of 4% to 6%. Creighton’s enrollment rose in some fields (nursing, for example), but CoBA dipped initially. However, in the fall of 2003, CoBA enrollment rose by 40 students.

At the college level, the early part of the decade was orchestrated by Dean Robert E. Pitts, who took over in 1997 (and remained as dean until 2004). In the spring 2003, Union Pacific Railroad endowed a department chair for $1 million.

The second half of the decade saw new leadership with the arrival of Dean Anthony Hendrickson, PhD, replacing longtime faculty member Deborah Wells, PhD, who served in an interim capacity since Pitts’ departure. Hendrickson, who had worked at Iowa State University as associate dean for graduate programs, had a background in both education and business practice. Hendrickson brought a no-nonsense philosophy and won over Creighton leaders by telling them that too much focus on research was missing the mark. He believed that a successful business school needed to seek out businesses, learn about their problems and then set to work with faculty and students to solve those problems. 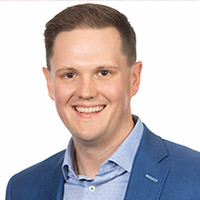 Aaron Schaben, BSBA’08, is president of Carson Group, the Omaha-based financial services firm that has more than $16B in AUM and 130+ partner offices across the country. He is charged with leading the firm’s business growth and development, overseeing its coaching and partnership offerings and managing initiatives supporting growth and development through M&A opportunities.

Under his leadership, Carson has been named to the Inc. 5000 list for four straight years, listed as a Best Place to Work for Financial Advisors and recognized multiple times already in 2021 for DE&I efforts. Aaron is a sought-after speaker at industry conferences and events and is regularly featured in wealth management publications.

During his time at Creighton, Schaben was active on campus as an undergraduate student. He served as co-coordinator of the Creighton Business Symposium, moving the event off campus to the then-Qwest Center to effectively increase its attendance and secure its status at the largest student-run business conference in the nation. He remains an active alumni through the Portfolio Practicum class, Financial Planning Association and Financial Management Association. Beyond this, he volunteers with Dreamweaver Foundation and is a member of the Young Presidents’ Organization.

Schaben is married with two sons and resides in Omaha.